Special Feature: In honour of the Year of the Snake 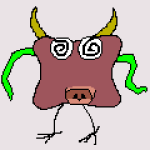 I was going to write a nice entry about the snakes found in and around Japan given weâ€™ve just entered å·³å¹´ï¼ˆã¿ã©ã—; midoshiï¼‰, okay, not if youâ€™re on the Chinese calendar proper, but weâ€™re not in China, so meh. Then I remembered that snakes freak me out a bit. I started looking at pictures and information, then decided to stop because I donâ€™t want

scary dreams. I thought that Iâ€™d got a lot better recently, but I think all the adorable snake presents and å¹´è³€çŠ¶ï¼ˆã­ã‚“ãŒã˜ã‚‡ã†; nengajouï¼‰have merely served to distract me. The real snakes are all cold and probably curled up in their little nests waiting for the winter to pass. Then theyâ€™ll sniff the air in a few more monthsâ€™ time, realize itâ€™s THEIR year and come out to play again.

Iâ€™m looking forward to it. I really am. Canâ€™t you tell how excited I am about it all? Sigh.

I know exactly when my snake issues started. I was watching some kind of nature program on the BBC (god love you David Attenborough) and they were examining a dead snake. They had to kill it because there was a human sized lump residing in its belly and they needed to check if it was indeed a person, or another unfortunate animal. It turned out to be a boar, but that didnâ€™t change the fact that it could have been a person. Swallowed whole. Itâ€™s the mouth thing â€“ all that stretching, that started me not liking them. The not liking them being poisonous came later, but Iâ€™m fairly certain the root cause of snake dislike is the elastic mouth factor. I donâ€™t have an issue with spiders in the slightest after all; the other â€˜occasionally going to kill you with a bite having hidden in your houseâ€™ animal that people tend not to be fans of.

Also freaks me out how fast they can move despite the lack of feet.

And that they can swim â€“ we come to â€˜Imogen snake freak out part 1â€™. I was 11, in a kayak on a very small pond (the Bomb Hole at Gilwell Park if anyone knows itâ€“ I know itâ€™s pretty unlikely ><) and an adder decided it wanted to go for a swim; right next to my boat. I donâ€™t care if it couldnâ€™t have got into the boat, I wasnâ€™t a very stable kayaker and I didnâ€™t want to get in the water with it. It was very close to me, and that was most definitely where I didnâ€™t want it to be. I think that was the first time I ever had a panic attack (and Iâ€™ve had maybe 3 in my life â€“ one of which was caused by claustrophobia in a clouding-up paintball mask, but there you go. Point being, I donâ€™t tend to get panicky about things that often). I paddled hell for leather away from the snake and got out of the kayak as soon as I could. The instructor was very bemused as no-one else had seen the little shit that was causing me such stress. Then I pointed him out as he made his way up the bank of the little island in the centre of the little pond. I wasnâ€™t crazy and just seeing things at leastâ€¦

Subsequent snake instances have generally been related to them popping up when I donâ€™t expect it. Happily hiking along a road with my brother in Taiwan and BAM; snake next to my foot. Jumped a mile, actually squealed, and then realized that it was dead. It had been squished in the middle by a bike/car/very heavy personâ€™s foot so it hadnâ€™t looked dead when Iâ€™d glanced down and seen it mere centimeters away from my appendage. I therefore feel justified in my reaction *shifty eyes*. Iâ€™ve had a fair few similar experiences out running in Japan too. There was one instance of live snake, but I spotted it in advance and gave it a very wide birth. I have jumped out of my skin at dead ones too, of course, and always pay a lot more attention to where Iâ€™m going just after an â€˜incidentâ€™ in case the next one isnâ€™t dead.

Biking has not been immune to snakes either. The worst was nearly running over one, only to spot its two friends hovering nearby (okay, not hovering, that would be a whole new level of hell). I think I spent a good 2 minutes cycling along hyperventilating and swearing under my breath. Hiking with friends I was very, very glad that I wasnâ€™t in the lead and one of my companions was therefore the one who frightened away the mamushi thatâ€™d been laying across the path. Going up to school wasnâ€™t a fun one (another â€˜look down and lo, thereâ€™s a snake!â€™ moment) but luckily it was lunchtime rather than the morning, and students were all up in the main school. Ever since Iâ€™ve walked closer to the centre of the school driveway.

To be fair on myself, and the snakes, I still think theyâ€™re pretty cool, itâ€™s really only when I

donâ€™t spot them in advance that I have issues. If I know thereâ€™s one around I will even approach it, have a good look, and take a few pictures as lots other people would. This is all probably quite blasÃ© for some, a normal human reaction being described, I would

imagine. Slightly odder, perhaps, was my reaction to eating cobra curry then. I was genuinely hesitant to tuck in, and I think it was because I thought curried snakeâ€™s friend was going to pop out and attack me in a rage. Or that the curried snake was somehow going to reform in my stomach and get me from the inside. Itâ€™s strange how brains work sometimes. Safe to say, neither happened and the curry was pretty tasty (though the cobra on the chewy side).

I know there are lots of people who like snakes too. One of my students is quite a fan of our reptile friends and was telling me about one of the snakes you can find in Hyogo that has two types of poison â€“ one of its own and one it steals. Now it might not be news to some people, and it might be a common trait in other snakes too, but I thought it was pretty cool.

It eats poisonous toads and siphons off the poison for later use. How clever is that? However much I dislike them for destorying my usually calm and collected persona, they can be pretty amazing animals. Did anyone else see the news about black mamba poison possibly making a better painkiller than morphine without the side effects? Snakes are great. They just need to be more diligent about announcing their presence politely, rather than springing it on you like the occassional, â€˜oh, you didnâ€™t know the lesson schedule had changedâ€™ that we all know and love.

Iâ€™m going to try and use this year as a good excuse to stop being silly about snakes. Who knows, I might even be able to stop thinking I can only go hiking if wearing jeans (despite the fact its August and over 30 degrees) and boots. Hereâ€™s to hoping, and good years all round, snake-filled or otherwise.