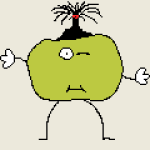 The rains came early that year. Waves would crash against the seawall while thunder rolled down from the hills. Furuyama-san carried an umbrella with her, but it was of little use when the afternoon rains came down. She sat inside her shed, listening to the drops pounding down onto the tiled roof. She kept the boy’s coat inside the shed. He always had an excuse for refusing to take it back, and eventually she stopped asking. She wrapped herself up in the coat, and if the rains continued until late, she sometimes slept.

On one such day, she awoke deep into the night. The rain had stopped, and all she could hear was the occasional patter of drops falling off the trees. She got to her feet, and lifted her little torch off the shed’s long-broken table. The torch was a gift from the boy as well.

She turned it on and stepped out into the night. All was dark in the village, save the odd dim streetlight. There were no stars tonight, only rain. The old woman started making her way towards her house. Up ahead, she suddenly saw not a shadow but a light.

It was making its way in a jolting fashion along the edge of the village, this way and that. It drew closer to her. It must be the boy. No one else in the village moved like that. He lifted up his phone, and suddenly saw the light of her torch. He let out a sound that made the woman jump.

The light of the phone flashed over the woman’s face, and then he recognized her. He switched his light off, and in a flash he had dropped to the ground. He was sitting in the light of the woman’s torch. She realized, suddenly, that he was hopelessly drunk.

“I fell asleep,” she said simply. He didn’t reply. “I have your torch. So I can easily walk back at night. My vegetables don’t need me when there’s so much rain, so even an old woman like me can get some rest.”

“The onions will be ready then though. Summer onions are the best, I’ll give you some.”

“No. No. No. No. No.” The boy shook his head emphatically. “I can’t take it Furuyama-san. I can’t even see the Big Dipper.” The boy was staring up at the sky. He’d said the last sentence in English, and the woman was confused. She looked closely at him, and realized that he was soaking wet.

“Where have you been all night? You’re so wet. Did you fall in the sea?”

“I went to the shrine at the top of the village.” The boy had switched back to Japanese. “It’s so beautiful, so peaceful, bamboo, little ponds. So empty Furuyama-san, empty, empty, empty, empty. I sat there saying ‘Kami, kami, kami, kami, kami please come help me. Everybody here says there are kami. They say you are a kami! But you know what I learned tonight Furuyama-san? There are no kami here. No Big Dipper.” He didn’t know the Japanese word, so he kept saying it in English. “I sit there, by the shrine, in the rain, getting so, so wet. And you know what I can hear? Frogs! Instead of kami, I listen to frogs, all night long. Frogs and rain. Rain, rain, rain, rain. And soon it will be hot, hot, hot, hot.”

Tears were streaming down the boy’s face, and he leaned back on his hands, staring at the sky, making strange noises. Furuyama-san was shaking. She gripped her torch tightly, and slowly sat on the ground. She was careful to be more than an arm’s length away from the boy.

He stood up abruptly, felt his footing. He could walk. He stumbled off in the direction of his house, leaving the old woman still shaking where she sat. As she watched his shadow disappear, she suddenly noticed some movement coming towards her. It was a frog, hopping along the path in the opposite direction of the boy. “Rrrribbet,” the frog croaked. It jumped up into the space that had just been occupied by the boy.

The next morning, when the boy walked to work, resignation letter in hand, he was surprised to find his old coat and a torch he had bought weeks earlier lying on the ground at the edge of the village. The previous night was a blur. But he’d awoken a new man, freed from the recent strains of his life. He muttered a satisfying swear to himself under his breath, gave the torch a little kick, and continued merrily on his way out of the village.

August was hot once more. Furuyama-san sat in the shade of her wide-brim hat, working on her cabbages. She’d just started the morning’s weeding, when she heard a distant scrape of gravel. She looked up. A shadow was in the distance, framed against the natural angles of the village houses. Furuyama-san took in a deep breath, and smiled to herself. As the shadow came near, she could see that it was a girl. Very fair skin, high sharp nose, blue eyes that were darting a little nervously in every direction. Furuyama-san stood up from her stool, and turned to face the girl. She pointed a quick little bow in her direction, and called out: