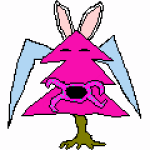 Another book has been added to the Hyogo AJET Book Clubâ€™s Goodreads bookshelf: 1Q84. On a surprisingly sunny Sunday in June, some 17 book clubbers gathered, eager to share thoughts on one of many Murakami worlds.

â€œNomadika provided a bright, refreshing atmosphere in hip Motomatchi to discuss Murakami`s lengthy, surrealist work 1Q84 for the 5th Hyogo AJET Book Club meeting. Sipping on my decadent caramel macchiato (hot, regardless of the warm weather), I was eager to get to know the opinions of my peers on a book that I hungrily zipped through yet left me with a feeling of, well, â€œIâ€™m not so sure what I thought about that.â€

Opinions differed, but one common sentiment I picked up on was that the book was enjoyable, until the surrealism got a little too surreal (however, there were a couple of people who also said they enjoyed this aspect). 1Q84 is a world of â€œLittle Peopleâ€ that emerge from the mouths of dead goats and little girls, of two moons that not everyone can see (or at least not everyone thinks itâ€™s out of the ordinary), of disturbing sex rituals, astral-projecting NHK collectors, and of Cat Towns you donâ€™t want to stick around in. Needless to say, it has some rather interesting elements. What drew me in the most, however, were the characters. While I didn`t feel completely satisfied with the book, I must say that it stuck with me. Spotting two little girls the other day at the station trussed up in flowered frocks, gloves, and wide-brimmed hats like their mothers next to them handing out pamphlets, I couldnâ€™t help but feel a pang of sympathy for them and think of Aomame and Tengo, the two protagonists of 1Q84 who suffered play-free weekends being dragged around town to help their parents fulfill their missions â€“ whether it be gaining one more convert or another NHK subscription fee paid. The romantic connection between these two characters was something I enjoyed, and for me provided the main reason I wanted to keep reading the book. This sentiment, however, was not shared by many of the people I talked to. Regardless of our viewpoints, however, it seems as though most of us got at least something out of the book, even if it was just a sense of perplexity. For those of you who take the time to read all off the 1000 plus pages in the three books, you will be rewarded with some closure, yet also â€™a pool of questions marks.â€™â€

As is Book Club fashion, we voted for the next read. It seems we are set for another surreal read. Dana Warren from Sasayama who had suggested â€œAll the Light We Cannot See,â€ had come across the book in an unexpected way:

â€œI actually came across the book rather suddenly. Thereâ€™s this little pizza place near my school in Sasayama. Some of the other teachers and I go for lunch regularly and so I got to know the owner a little bit. One happy lunchtime during midterms the owner randomly handed me a hard cover copy of â€œAll the Light We Cannot Seeâ€. He said he loved the author but it was just too much English so I could have it and pass it on to all my English speaking friends. Of course, I took it with a smile and many an ã‚ã‚ŠãŒã¨ã† but I was dubious. Really, what are the chances that someone whose only interest in common with me is a healthy love of pizza, could recommend good reading material? Pizza, however, is apparently all we need! When I finally swallowed my sighs and actually read the thing, I found a wonderfully well written and engaging novel about first love, war, and radios.

â€œAll the Light We Cannot Seeâ€ is set in France and Germany during World War Two. It’s about a blind girl in Paris whose father builds tiny models of the city so she can learn her way around the streets, and an orphan boy from a mining town in Germany who hopes to escape a life in the mines through his technical genius. The intricacies of how the two finally come together during such a terrible time are fascinating, while maintaining the truly horrific realities of war. Itâ€™s a big book full of deep and often dark themes but thereâ€™s still room for sea snails and a cursed diamond, funny old women and cake.â€

The JET year has flown by, pushing me sadly closer to my departure date. Alas, this means I must leave the Book Club. Thank you to everyone who has come and joined in the literary fun! Iâ€™ll keep an eye out for the current Hyogo AJET Book Club books via Goodreads and will read along with you back in Blighty.

And for all you new Hyogo JETs, welcome to the best prefecture! Get to know folks from all over Hyogo by joining the next Book Club meet up on September 21st 2014. I am leaving Book Club in the more than capable hands of bookworm Sean Mulvihill.

Thanks again! Keep that nose in a book!

A note from the new Book Club leader, Sean Mulvihill:

â€œAs an avid reader and participant in this yearâ€™s Hyogo AJET Book Club, I am looking forward to continuing the great work Cherie started this past year. It is not going to be easy following those footsteps, especially since Cherie has found so many incredible places in the Sannomiya-Motomachi area to eat, drink, and enjoy lively discussions, but with continued support from Hyogo JETs I know we can build off this success.â€

Book: All the Light We Cannot See by Anthony Doerr

The First Rule of Slade House is Donâ€™t Go into Slade House: Book Club the 14th