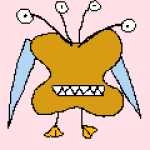 The goal of the Omiai Speed Dating Game is to give the students a fun, real-world context in which to practice the target grammar, in this case “X is as ~ as Y,” many times in rapid succession, until they are able to do it naturally and fluidly. This game has the added bonus of provoking non-stop giggling, because it asks the students to search among their classmates for a spouse.

Students write three opinion sentences using the target grammar. In this case I asked the students to make value judgments about school and free time, American food and Japanese food, and love and money.

The girls stay seated while the boys move their chairs around to the front of the girls’ desks. I give them one minute per “date.” Make sure you keep it fast-paced, or their attention wanders. After one minute, I tell the boys to stand and move to the next empty chair (make sure the boys are clear on which direction to move: when we did this in my class there were mix-ups).

Students who share the same opinion on a point put an “O” in that boy or girl’s column. Students who disagree put an “X.” Explain to them beforehand that students who have matching values (all “O”) are compatible and can get married! (cue round two of squealing).

If your class has an uneven number of girls and boys, you can either give someone a one-minute break, or double them up. For example, if there were two girls to one boy, the conversation would go like this: