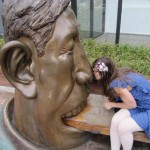 Yes. That is the first thought that comes to mind when I think of The Brief Wondrous Life of Oscar Wao. The second thought?  F**K yes . I don’t know if it was the cursing in the book, the overdose of attitude, or the look into a family that makes you scared as s**t, but boy did I feel saucy after reading this.  It’s written with a flare that could light the book itself on fire; Junot Díaz knows what he’s doing.  The story will make you want to kiss someone when things go well, and drink a few shots of whiskey (and find a weapon) when they don’t.

I can’t even properly give this book a teaser, because I’m terrified of revealing something.  What I can tell you is that from the beginning we are pushed into the life of Oscar Wao, an overweight nerd who is obsessed with science fiction and falling in love.  The introduction to the book warns us of the power of “fuku” (a terrible curse) and “zafa” (its cure).  Though we constantly want happiness for Oscar, we are pretty aware of the futile nature of that hope.  The dialogue is fast, witty, and oftentimes full of f-bombs and name-calling.  From past to present, we delve into Oscar’s world, wanting to hold him close when things are rough, and wanting to slap him over the head when he does something stupid.  Though, don’t let the title fool you – the novel is about Oscar, but it’s also about Oscar’s life and the people in it.  I was very confused for a few minutes when reading; I started thinking Oscar had had a sex-change or something, before I realized we were now hearing from his sister, Lola.  So, the narrative changes and flows differently, and despite my minute of “what the f?” I found myself rather intrigued to be spending time with other characters and following through on their anecdotes.

The book provides footnotes here and there to help us understand some important historical points for the Dominican Republic – the conflict, the hate, and the infamous dictator Trujillo.  The footnotes often read just like the novel, and you may not even notice you’ve left the story to read more about ‘what actually happened’.   For those with any background in Spanish, you’ll have your fair share of profanity spewing out in many chapters – sometimes delightful and other times making your head spin.  There are also – thanks  to Oscar’s obsession with anime – some Japanese gems.  It feels like being let in on a secret when you can understand them, as most of them won’t come translated in the book;  you may want to brush up on your Spaingo and Japonese.

It’s a must read.  Seriously.  I mean, how can you not get engrossed in a novel that’s first chapter is titled “Ghettonerd at the End of the World”?  Right?  Right.  Though, don’t plan to sit back and relax – you’re going to want a place to hide and a few shots of booze with this one.