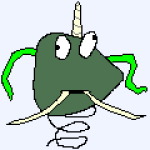 This temple’s rock garden was designed to represent the beach where a teenager was killed in single combat. His death is one of the most famous in Japanese history. His killer renounced his samurai life soon after and became a Buddhist monk. This place has some serious education going on…any guesses?

Know where this photo was taken? Maigo in Hyogo challenges you to recognize more of our beautiful prefecture!

Answer: Sumadera Temple. The statue on the left is of Taira no Atsumori (the young boy) and the right statue is of Kumagai Naozane (who turned into a Buddhist monk)

For past issues of Maigo in Hyogo, click here