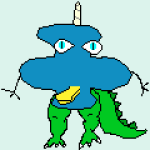 So you think the exciting title is going to be ruined by something boring and museumy? Think again! Last weekend three friends and I trekked all the way to Mie to discover the secrets of stealth at the Iga-Ueno Ninja museum.

First you have to take the ninja themed two car train from Iga-ueno (a town which, from my hour and a half wait there, can only be described as purgatory with coffee), and then approach the museum through a park packed with red leaves and mini-ninjas. I am not talking about ninja models, I am talking about mega-cute red and blue children running everywhere in their hired “stealthy” attire. I was hoping that I would be given an outfit to run around in but alas, in Japan I am too tall to be considered a child.

The first bit is a “ninja style” Japanese house where everything is set up to terrify your neighbours. There are magic doors and secret portals, staircases that turn into book shelves, floorboards that lift up, hidey holes for your weapons, and hidden guard spots for the stealthers (those of the stealthy disposition) themselves. Apparently using it all takes years of practice, but they didn’t give me the chance to prove them wrong.

There is an actual museum bit, which was much improved by the opportunity to play on the mizugumo, shoes that allow ninjas to walk on the marshy ground that surrounds the castle. Unfortunately you might have to fight the mini-ninjas for a turn, but if you just whip out your gift-shop shuriken (throwing blade), that should be no problem!

The experience is rounded off by a ninja show, well worth the extra 300円. You get to see a bit of ninja style meditation, a bit of shuriken-throwing, but mostly a lot of very cool looking / choreographed fighting. My personal favourite was the girl with the poison dart, but unfortunately she stabbed a balloon and not a member of the audience. Sad times.

All in all I would thoroughly recommend a trip out there, but don’t make my mistake – go in fancy dress!

Let’s Koshien! How to Baseball in Japan like a Pro

Do You Know the Geeky Man/That Lives in Nerd-y Lane?