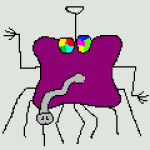 Since arriving in Japan I have been in pursuit of the perfect burger to satisfy a burger lust that started as a child when I first bit into an In-N-Out burger in California. I was looking for the perfect balance of meat, cheese, onions, and a soft bun, but so far in Japan, this had proved to be impossible to find. It was only after hours of hamburger research on the internet that I stumbled upon a place that some claimed to serve the best burger in Japan. Best of all, it was located in the heart of Nishinomiya, just twenty minutes from Kobe and Osaka.

Awajishima Burger, a small, literal ‘hole in the wall’ in Nishinomiya has a cult following for those who know what they want in a burger. On a quiet and empty industrial street under a railroad track, a small 10 by 15 foot burger shack, only able to seat seven, awaits. It is quite difficult to find but if you get lost, just follow the smell of burgers in the air and the look for the large cluster of people waiting outside what looks to be an abandoned building.

The choices are simple. You can have a large burger (650 yen) or a small burger (500 yen.) It comes with lettuce, tomato, sautéed Awaji onions, mayo and secret sauce, which tasted like a sweet and tangy bbq sauce. It really is a good sauce and brought the whole burger together quite nicely. For an extra 100 yen each, you can add onion rings (which are famous and rightfully so,) bacon, a fried egg, or cheese. The freshly made onion rings are hot and crispy and alone are worth making the trip for. Any vegetarians who won‘t be partaking of the burger itself need not fear disappointment. They also offer Kona Beer from Hawaii, which is a nice treat for those who want something different to the sometimes insipid beers of Japan. I made the mistake of ordering a side of fries with my burger. Unlike the rest of the offerings, the fries were not good at all – cold, a bit soggy, and boring.

The burger was amazing. I ordered a large burger with everything, and it was massive. The patty was soft and juicy and almost melted in my mouth. The pure taste of beef was a delight and not hindered by the chopped onions or breadcrumbs that sometimes hold terrible burgers together. The bun was soft and sweet, but did its job of containing the burger well. All the ingredients were fresh tasting and nothing seemed to have been pre-packaged. It was quite delightful.

Overall, Awajishima Burger was by far the best burger I have had in Japan. Its fresh ingredients, delicious beef, and otherworldly onion rings make this place a must stop for all burger lovers. I recommend it to anyone that is tired of going to Lotteria and quickly regretting it; or for those who trick themselves into thinking that McDonalds is actually good by Japanese burger standards.  After going to Awajishima Burger, you will be pleasantly enlightened to the fact that a quality burger can indeed be found in Japan.

5 Restaurants you must visit in the Kansai area